Unity WebGL version available here if any issues running it on itch.io https://play.unity.com/mg/other/lastonlinewebgl

You find yourself logging into an old MMORPG that you haven't played in 8 years. You see an old friend "LegendaryWarrior723" who is still playing!

A short game game where you complete a couple of minigames to create a legendary sword. Features branching dialogue, a fishing mini-game and a combat trial.

The first game jam for most us involved, all made in 48 hours for the Wholesome Game Jam 2022.

Let's All Get Along~99 days ago

Damn man, it gave me a lot of feels and melancholy playing through, it felt so nostalgic depsite me never playing it before and the interactions were so wholesome and when the son was explaining stuff you could really see the nostalgia and longing for the past. It must have been so cool for the son to find out how much of a badass his mom was and you could tell the MC admired and respected the mom a lot, even to the point of returning after 8 years in order to fulfill a trade which is so heartwarming yet sad when the free trial expired cause it felt like the MC could move on and close the chapter of their life. Man, the music is also such a nice touch from a quirky old school rpg music to a melancholic one when MC explains the glory days. Especially when you can see the last online of many of the other players that must have been in the same guild. I wish the son all the best and I hope the mom can feel happy that MC remembered such a silly trade after all these years and helped her son find a new meaning in the game that holds so much memories--

God dang it I'm feeling so much things, especially because of this music!!!

Very well written story! To fulfill the trade after all these years? Pretty epic. The minigames all feel very appropriate with the theme, even the fishing mini-game feels very RPG-like. It definitely captured the fleeting reunion feel nicely. Well done!

I had some slight issues but for such a short jam it's really well made :)

Now that truly is a wholesome game! Well done!

This is so sweet. I think the typing styles of the son and mom could've been a bit more unique to differentiate between the two more easily (would've made the path I chose more understandable as soon as the typer changed), but it's clear enough. It'd be nice if there was a check for if the challenge had been previously completed, since I had to replay the entire fishing minigame when I went back north outta curiosity, but that's okay. Nice work! Love the title, haha.

Thank you for the feedback! Will definitely look into applying this feedback!

That was really great 💕

The idea is very good and it made me feel a lot of nostalgia.

Thanks for this very nice game and good job.

Pretty emotional, and great game feel, liked the minigame and in the boss player could have an life meter or something like that, cgrats on the game!

On the "Hit the Boss" (2nd task) screen, I got knocked behind the boss and then couldn't get back onto the path needed to hit the boss.  (I'm on the wrong side of the fences.)

Thanks for letting us know! Do you remember if it was the top fence of bottom fence you fell through?

I think it was the back and then I wound up on the top.  But then I could go to the bottom easily.  Sorry.  I only spotted this today.  : / 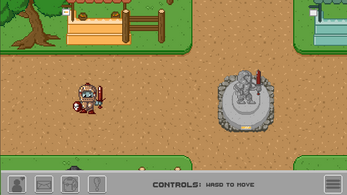 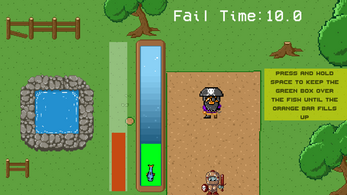